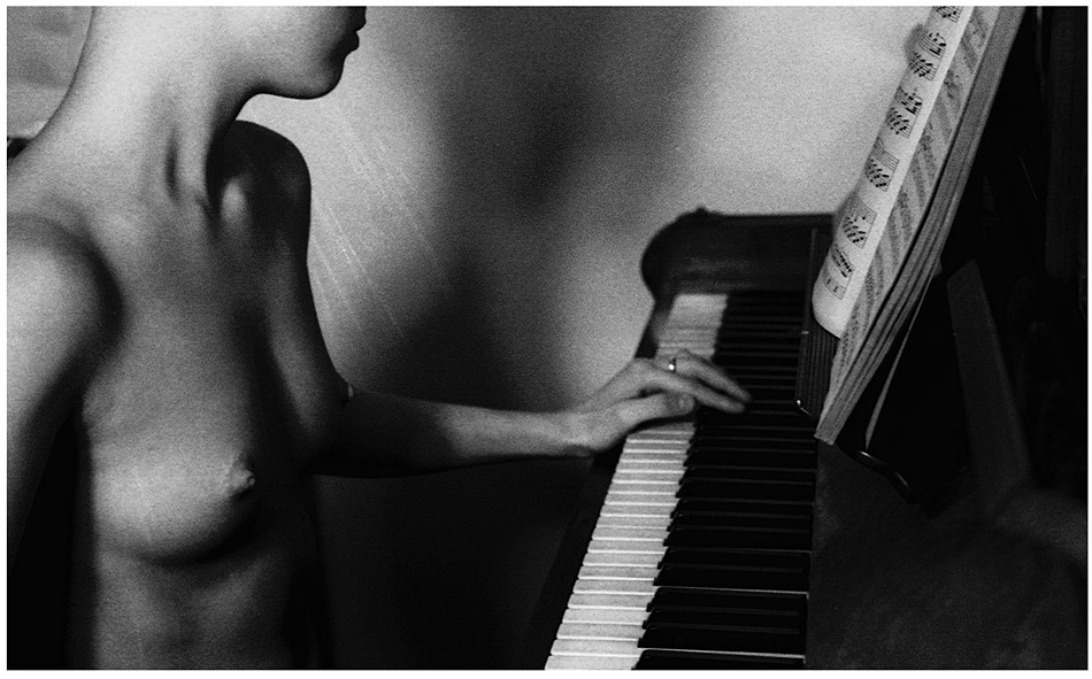 Miss Ashdown finished unzipping Jessica’s skirt and, sliding her hands between the fabric and Jessica’s hips, she pushed downwards and Jessica saw the skirt fall to the floor and pool around her feet. Miss Ashdown knelt down and put a hand around first one ankle and then the other to lift it to move the skirt out of the way. She tossed it to one side with Jessica’s shoes and socks.

The teacher stood up and put her hands around Jessica’s waist again to manoeuvre her to the piano stool. Jessica felt somewhat odd, standing with her bare legs and feet, but Miss Ashdown continued as if it were the most normal thing in the world.

She moved to the opposite side of the piano stool. “Okay, first your right leg.” Jessica swung her foot up onto the stool. “It needs to be straight,” Miss Ashdown said, and again Jessica nearly jumped as she felt hands around her foot as her teacher pulled her heel deeper onto the stool.

“Now, as I did, from standing, hands on your thigh.” Jessica put her hands on her bare thigh. “And then slide downwards slowly.” Jessica did as she was instructed, and was surprised at being able to reach her ankles, albeit not her feet as Miss Ashdown had done.

Read the rest of The Pianist, and 11 other ENF stories, in Naked Women in Shorts

I’m pretty much forced to wear a dress to work on Mondays now, because Mel will only let me wear one thing as far as her building entrance. But I did get a couple of compliments about how nice and summery I looked! And it is starting warm up again but still not exactly hot so it felt a bit cool on the way to work this morning.

I wasn’t quite as edgy getting to Mel’s as last week, and I decided that it was better just to get the whole routine of stashing my dress into Mel’s mailbox and taking the naked elevator ride to the fifth floor out of the way as quickly as possible. I didn’t meet anyone on the way there, despite the long wait outside Mel’s door, and it’s quite a buzz to be standing there nude and on my own and with no clothes anywhere nearby. It just seems like it could also go so badly wrong.

And Mel had some work for me to do too, which of course entailed my wrists and ankles being tied together and making me work through a pile of receipts and emails with only limited movement. I was half-hoping for a repeat of the previous week’s performance but apart from when I was being tied and untied she barely touched me and we spoke very little.

It almost felt like normality to be sitting and working nude. I really am wondering what’s becoming of my life.

“Everyone was masked, and I was the last person anyone would guess would arrive naked.”

I still haven’t looked at my photos online yet, but I got a message from ENFBoyfriend to say that the new ones were really bold and not at all what he expected, and wasn’t I worried if other people at work found out. Of course I’m worried and I’m kind of hoping that if I don’t look then it hasn’t happened.

For some reason I tried to keep up with Mel at the start of the park run. It didn’t work and I went really slowly after the first two minutes as I tried to get my breath back. She didn’t hang around at the end so I didn’t see her again.

But more fun was popping out to see Ellie and Stephen this afternoon. They’d been to an exhibition and then I met them for tea and scones, and there was a nice waiter and I couldn’t help but say that it wasn’t quite the same without having a naked man serving us.

Even Stephen couldn’t let that go and asked what I meant, so I let Ellie explain. She made sure he knew it didn’t get rowdy but I could tell he was jealous, because who wouldn’t be? Then Ellie said that he hadn’t complained about what happened when she called him up unexpectedly the same evening and stayed over and he went red.

Well, I wanted to stir up trouble, so I said that maybe Stephen should serve us two afternoon tea in the nude. Stephen went even redder and Ellie said it sounded like a great idea, and Stephen said no way, and he reckoned I really didn’t want to see him naked. But I kind of did, for the fun of it.

So we said it was a deal, and he kept saying no, and I said would he do it if I did it, and he asked if I meant at the same time and I said no, but he’d have to do it next time, and for the first time I saw him checking me out, imagining what I’d look like naked. He actually looked kind of interested. Then I said or maybe Ellie should do it and he felt like he was turning the tables by saying he’d do it if she did first.

So he was floored when Ellie said fine, but she’d make a deal with all of us: we’d spin our now empty water bottle on the table and whoever it pointed to had to bring tea and scones, in the nude, to the other two. Stephen really didn’t want this either but I told him he had a two in three chance of being served afternoon tea by a naked woman and if he was any kind of a man he’d take those odds, plus we were sitting either side of him at a four sided table so the chances of him getting it were more likely one in four.

Before he could complain Ellie cleared a space, spun the bottle, and… she’s going to be serving us afternoon tea in the nude next weekend! Stephen was very relieved, Ellie seemed more than happy to be honest, and I’m kind of disappointed it didn’t pick me. 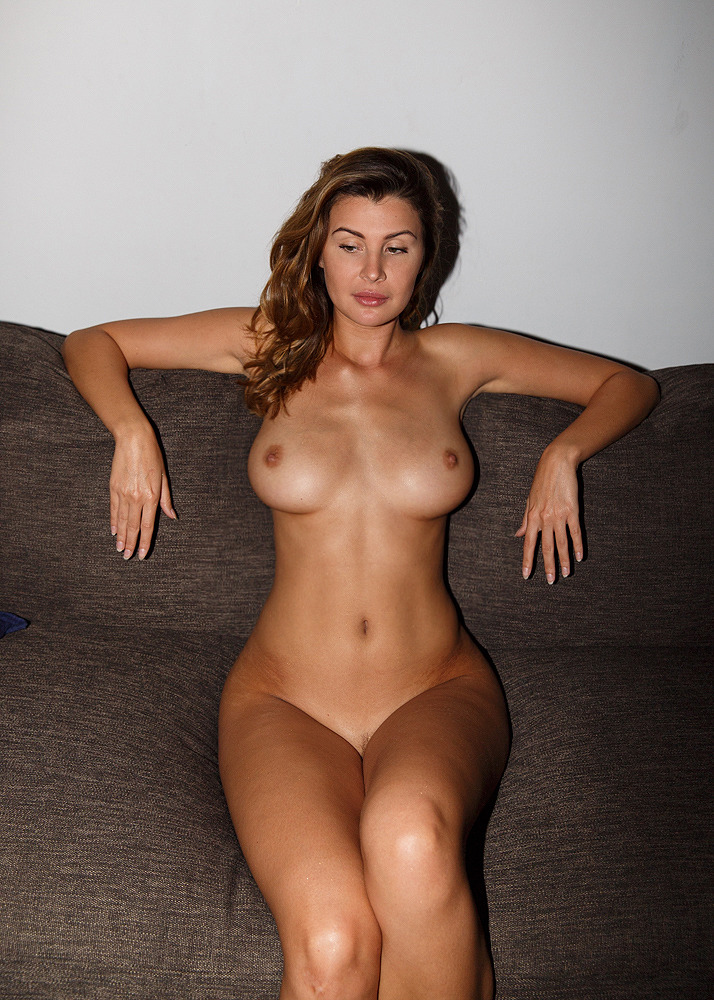 I had a message from Ellie today asking if I wanted to meet her and Stephen tomorrow since they’re nearby. Sometime in the afternoon, which will be nice. I couldn’t resist asking her about how things were going with Stephen at the moment and she said fine, and nice, but even though they had sex it wasn’t all the exciting. That’s the complete opposite to me, I guess: not much sex, but when it happens it’s out of this world.

This evening I had some quiet time at home and it was good to hang around in the nude just by myself, strangely enough.

Lunch with Mark was just normal lunch: no nudity, no groping, and no orgasms. But it was nice. I had to tell Ha I was seeing him and she kind of smirked and said if I came back with a smile on my face she’d know why. I did come back with a smile on my face but not because of the reason she thought, because it was just nice to have a slightly flirty lunch with an attractive man, but also because he said they were thinking of going for a weekend away soon and did I want to come! Did I ever.

No more details but even the possibility is amazing.

“This game of truth or dare was not going as I’d hoped.”

At least Pilates gets some frustration out of me and feels kind of normal. And I’m meeting Mark for lunch tomorrow! Although I’m not quite as desperate for sex it’ll be nice to see him.