My next ENF short story collection, Just ENF, is now live on live on Amazon, and for the first time it’s available both as a Kindle book or as a paperback. The paperback costs $8.99 and the eBook is $2.99, which is a bargain for 200 pages and 12 entirely new stories.

Here’s a little teaser from one of the stories in the book called “On The Bench”:

“What are you doing?”

“I’m tying your wrist to the back of this bench,” Kasia replied.

“Don’t ask silly questions,” Kasia told her as she stood. Lucy looked over at her arm: it had been draped on the back of the bench and around Lucy’s shoulders, but now it was tied to the wooden slat against which her shoulder blades rested.

Kasia stepped over Lucy’s long, outstretched legs and took hold of her other wrist. She pressed it against the back of the bench and wrapped another length of cord around it, tying it to the other end of the wooden slat. She stood back and looked at her beautiful girlfriend, her arms stretched out either side of her.

“Yeah, but why?” Lucy asked her partner.

“So I can have my way with you,” Kasia replied and she knelt to straddle Lucy’s lap. She leant forwards and kissed her. Lucy tried to pull her hands towards her but the ties were too strong. It was such a turn-on, having Kasia kiss her while she was helpless, but she couldn’t help but wonder what had come over her; she’d never done anything like this before.

Kasia sat upright, still kneeling across Lucy’s lap. She looked down at the young woman in front of her, Lucy’s dark, beautiful eyes looking back at her. Lucy was wearing an inviting summer dress. It was light blue, strapless and off the shoulder with buttons all the way down the front and tied by a belt at the waist. Kasia put her hands on Lucy’s chest; she could feel her hard nipples beneath the cotton, the dress being too short to wear a bra.

“Okay, can you untie me now, please?” Lucy asked her.

“No, I don’t think so,” Kasia told her as she slipped off the bench to kneel between Lucy’s knees.

“But… what are you doing?” Lucy asked her. Kasia rested her hands on Lucy’s thighs and then slid them into bottom of her dress, right up to Lucy’s hips. Lucy trembled at her touch.

“I found your browsing history last night,” Kasia told her, “I see you’ve been fantasising about other women.”

Lucy started to mouth a denial, and then realised it wasn’t going to hold up, not if her browser history had given her away. And she had been watching a couple of videos…

“I clicked on one and watched it,” Kasia continued, “There was a woman tied to a bench. It was very entertaining.”

Kasia hooked her fingers into the waistband of Lucy’s knickers and pulled. Lucy yelped and tried to squeeze her knees together, but Kasia was between her thighs and had a strong hold of the flimsy underwear. She pulled it out from beneath Lucy’s dress, down her legs and unhooked it from her dainty heeled sandals.

Lucy clamped her knees shut. “Oh, I’m going to get you for this,” she told Kasia, although the tease was certainly turning her on. But this dress was far too short not to be wearing knickers.

Kasia remained kneeling at Lucy’s feet. She slid her hands up the outside of Lucy’s thighs, feeling the soft skin beneath her palms. She pushed her fingers up beneath the summer dress, enjoying the feeling of bare skin. Further up she went, over Lucy’s hips, until she was stopped by the tight band of Lucy’s belt around her waist.

Lucy’s eyes closed as her body was caressed. If only they weren’t in the middle of the park, this could really be fun. She would be sorely tempted to open her thighs a little, to invite Kasia within.

I’m really excited about the new book and each and every story in it. And if you don’t know if you like my stories, head over to the Exclusive Stories section and read one or two.

If you don’t own a Kindle, and you don’t want the paperback version, then there’s another way to get hold of the book: any new Patreon supporters that join between now and Christmas will receive a free copy of the eBook as a PDF. Copies have already been sent out to my existing supporters, who get their hands on my stories before anyone else.

Supporting me on Patreon only costs a couple of dollars a month and you get all kinds of free goodies, access to preview chapters, plus the copy of Just ENF. And you’ll also get the warm fuzzy feeling from supporting a struggling writer, and earn my eternal gratitude.

Signing up on Patreon will automatically save you 99c on the eBook, but if you want to get Just ENF on your Kindle or in paperback format then head to Amazon right now!

“Each morning my wife would wave me off to work and tell me not to come home too late. And I tell you, I was never late home. Not once.”

The train trundled slowly between stations on the outskirts of the commuter belt. We were the last two passengers. I was pretending I was engrossed in my book while she muttered and shook her head in the seat opposite. With the distraction of that, and the attractive pair of legs that kept crossing and uncrossing, I’d hardly turned the page for the last half an hour.

“Can you believe it?” she suddenly said. I looked up for the first time. She was looking straight at me. She had icy blue eyes, full red lips, and long, blonde hair tied into a bun on the top of her head. She was probably in her mid-twenties and was stunningly beautiful.

“Hmm?” I said. It was all I could manage in response as my pupils dilated so I could take in as much of her as possible.

“They think they can just walk all over you,” she said, looking out of the window. I followed her gaze. It was a warm autumn evening, with light still in the sky, and the open window allowed a welcome breeze to enter the carriage.

“Yeah…” I said, not really sure what I was supposed to say. I pretended to return to my book.

“Years they’ve made me wear this stupid uniform,” she said. I looked up again. She looked very attractive to me in a bright red pencil skirt and jacket, white blouse buttoned all the way up to the neck and a mauve scarf tied loosely around her throat. In fact, I’m sure I’ve fantasised about a woman who looked like her many a time before.

“I think you look great,” I said with a half-smile. Partly I was trying to calm her down, but maybe this was how she met guys and I didn’t want to miss an opportunity.

“Not good enough to be senior cabin crew, apparently,” she said. So that explained the uniform, and the bad mood.

I smiled, still not knowing what to say.

“Well, I’ve had enough of them,” she said, and she pulled at the scarf tied around her neck. The knot unravelled and she screwed up the tiny ball of light fabric and stared intensely at it as she rolled it between her fingers. Suddenly, she tossed it out of the window.

“Been a tough day, huh?” I asked, wanting to offer some kind of support.

“Been a tough year, more like,” she answered. Now she had my attention, I couldn’t take my eyes off of her. “They make us wear all this,” she looked down at herself and I followed her gaze, right down to her elegant, shapely legs and the bright red shoes on her feet. “And we all know it’s just to keep the men occupied gawping at us on the flight.” I could see why that would happen.

She suddenly stood in front of me, feet together, one leg slightly bent at the knee and her hand on her hip. “They just make us look ridiculous.”

I looked her up and down again: she looked like a dream come true, but I didn’t think saying so would help. Nor was I about to agree that she looked ridiculous.

“This jacket is always pinching at the waist,” she continued, and as she spoke she unfastened the single button that held it closed, shrugged it off her shoulders, slid it down her arms and held it out in front of her as if she’d found a dead rat in her kitchen. She looked at it in disgust.

“Well, screw them, and their uniform,” she said, and she threw the jacket out of the window. I watched as the wind took hold of it and it flapped into the bushes by the side of the tracks. My first thought was that it looked far too expensive a jacket to be throwing away, but then the thought was erased instantly.

“And these shirts nearly choke us,” she said.

“We get trussed up like a turkey,” she said.

Four buttons undone. Now five. I willed her to keep going. I could see her white bra through the opening. She pulled the blouse out of the tight skirt waistband.

“And it’s all so the customers don’t have to treat us like people,” she said disdainfully.

She gave up fumbling with buttons and pulled hard at the bottom of the blouse. The last two buttons popped off and I watched as they rolled around the floor of the train carriage. She unfastened the cuffs as I tried not to stare at her chest and at her smooth, flat stomach. She pulled at the shirt sleeves with first one hand and then the other, almost tearing it off her arms, and then, without a pause, she bundled it up and threw it out of the window.

Continued in Naked Women in Shorts > 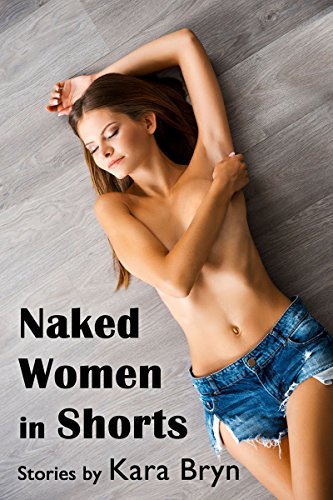 Read the rest of the story, and much more, in Naked Women in Shorts, available for the Kindle.

My next ENF short story collection, Just ENF, is available to pre-order for the Kindle and is due for release on December 15th. Here’s a little teaser from one of the stories in the book called “A Study in Exhibitionism”:

“And can you tell me,” I asked, “On a scale of one to ten, how aroused do you think you feel now?”

Melissa visibly jumped at the question, but answered it nonetheless. “Oh, I think, maybe… a four?”

“Thank you,” I said with a smile, “And what about if I ask you to take your stockings off now?”

I watched as her chest rose and fell as she took deep breaths. “I think that would be an eight or a nine,” she replied. It’s interesting how varied responses like this can be. I write down her answer.

“But if I asked you to take off your skirt?” I asked.

“That would be… maybe six. Or seven.”

“So, can you do that for me?” She sits rigidly in the chair. “Or would you prefer your stockings?” I phrased the question as a choice where “neither” is not an option. Melissa’s mouth moved but no words emerged.

“It’s your choice,” I said, giving her the illusion of free will.

If you like my stories then I really think you’ll like the book. And if you don’t know if you like my stories, head over to the Exclusive Stories section and read one or two, and if you can’t wait then why not pick up Naked Women in Shorts, my first story collection, to pass the time.