And just like that the first month of the year is almost over! I don’t feel like I’ve achieved anything at all. It’s probably a good job I didn’t really make any New Year resolutions (despite Sarah saying I had!) otherwise I would have broken them already, because I’ve done absolutely nothing productive.

Hopefully Monday with Mel will cover some serious ground, because everyone seems to be moving forwards at the moment and I’m just standing still.

“I tiptoed naked into his bedroom, slowly unbuttoned his shirt, removed his shoes, socks, trousers and underwear. As I left the room, leaving him naked and erect on the bed, I wished him a good night and padded back to my own bed with a wicked smile on my lips.”

I was brave enough to send a message to Mark’s mobile number asking him if he fancied doing anything at the weekend. I said that if he didn’t remember me I’m the girl who always seems to be missing most of an outfit. No reply yet, which is making me anxious. I’m not even sure if I’m massively keen on him, but he’s the best prospect I’ve had for quite some time.

I did have my hopes up when a message arrived, but it was from Ellie, which is still nice. She was asking if, now January was nearly over, I wanted to meet up with her and Stephen one evening, and perhaps I could bring someone. I’ll wait until Mark replies before I try and fix up a date, because I’d much rather go along with someone else than be the gooseberry. 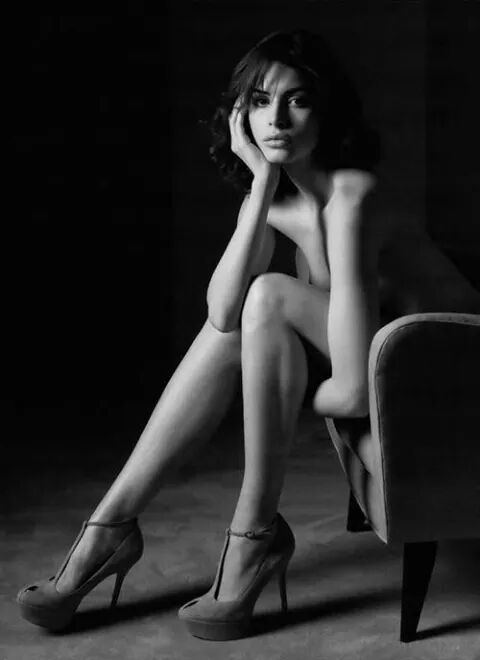 Suddenly Mia stood, threw off the coat and tossed it on the bed. As I expected, she was nude. She sat back down on the chair and crossed one perfectly toned leg over the other.

As I mentioned before, I’m not accustomed to being in the company of a naked woman, and certainly not in the privacy of my hotel room. I felt my face turning red: had I assessed this all wrong? Was Mia reticent to talk about relationships because I was a target for her? Had I given off signals? Was there any more of a signal than stripping to my underwear for lunch?

But Mia stayed sat in the chair. If this was a seduction it was a very passive one.

“I need to show you,” she said. I wondered what I could be shown that I hadn’t already seen.

“The stabilisers,” she said, “You can ride without them.” I began to understand what she might be getting at, and I dreaded the implication.

She stood and walked over to me and put her hands around my waist. My mouth went dry. Have I gone too far to stop this now?

“The club was only open to married women and their husbands, with each female member allocated a day in the calendar to be the center of attention”

I needed a quieter day today, and it was a busy one at work. Managing Rachel and Tim’s time takes up more of mine than I expected!

I still have my “performance” on my mind too. I’ve been watching the video a few times and started looking for clothing. The good(ish) news is that I seem to be shrinking, in breast size at least: I tried on some of the underwear I bought last year and I only just fill it! I suppose they were C-cups, which is bigger than I was five years ago, but I thought I’d never go back! Now I have to decide if I’d buy a B if I bought some more or just stick with the C’s.

I can’t believe that I’m actually considering this.

Tonight was meant to be my coaching session with Mel, but it turned out that she’d found some more documents about her business so I had to revise her tax return again. So the same as last week I sat in her office chair while she bound my ankles together, and then my knees, and finally my wrists, and this time she put ropes around the crooks of my arms that tied behind my back so I had to sit right up against the desk just to reach the keyboard! It was almost impossible to work, but not quite impossible. But I’ve never had my movement so restricted and, apart from being able to type and flip over sheets of paper, I’ve never felt so helpless either.

I called Mel in when I was finished, which took about forty-five minutes, and together we submitted the return and she paid her bill (which was a few thousand pounds! She’s doing okay with her business).

Mel asked me what I thought of it, and I said it was really sexy. Then she said “Good. Because I’ve told Elise you’ll perform it at her cabaret night at the end of March.”

If I wasn’t tied up I would have fallen off my chair! There was no way I was stripping naked in front of a room full of pub-goers. I was going to say “no way!” but Mel cut me off by saying I’d have to keep my knickers on otherwise Elise might attract the wrong kind of attention, and cover my nipples too, but Mel said I had a good enough figure now and even my posture was improving, and I had two months to learn the routine! I didn’t know what to say, because the way Mel stated it, and threw in a few compliments along the way, it was presented as a done deal before I’d even opened my mouth.

Mel told me I’d have to buy some suspenders and a garter belt for the routine, and a lacey corset, and some evening gloves, like she’d worn the other night, and find a short and pretty strapless dress that unzipped down the side. Apparently I can borrow her feather boa. She told me that it was all part of getting me out of my shell and, just like last night, it was just something I had to go through.

There’s something about being tied up in a chair that makes one very compliant, so I ended up nodding, even though I was telling myself there was no way I was doing it at the time. But it was almost like Mel knew what I was thinking because she made me promise, because if I didn’t she’d think of something much harder that I wouldn’t have time to plan for. I believed her.

Funnily enough, when I got home the first thing I did was to check my messages and, sure enough, I had something from Sarah with Mark’s mobile number in and a note that said “Let me know if it works out!”. She knows exactly what I want.

Then I had another message from Mel. It was the video. The video that I have to learn and perform. In two months. Gulp. 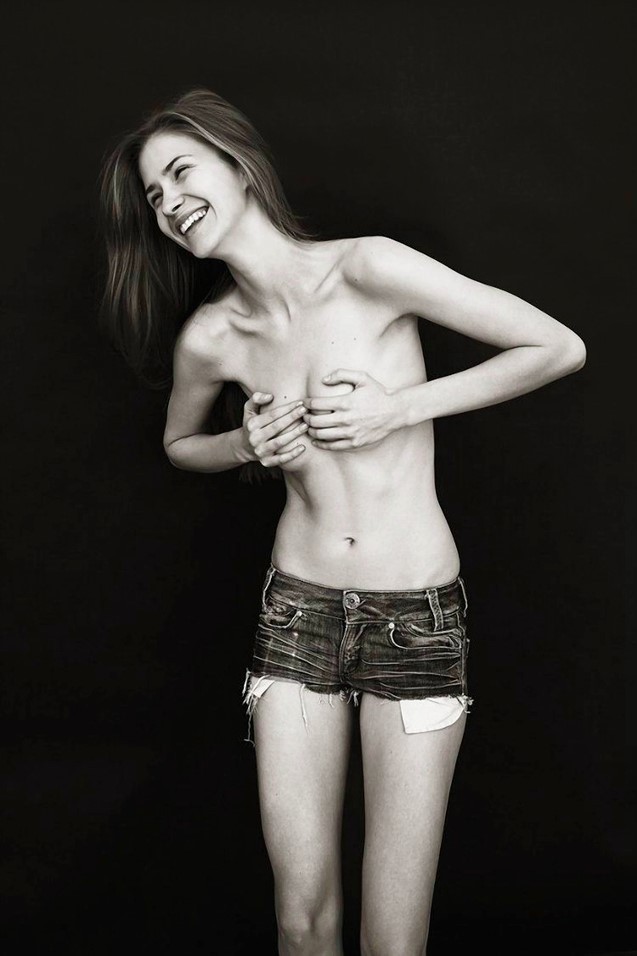 “Oh,” Cassandra said, looking at my brand new shorts, “Now just to roughen your edges a little…” She reached towards my waist and, for some reason, I didn’t even move as she unbuttoned my denim shorts. They were propped over my hips so they weren’t about to fall down by themselves, and the zip held them closed, but with that small change I felt so much sexier, just for having that button hanging open. How could a nineteen year old know more about this kind of thing than me?

“You were about to?…” Cassandra prompted, distracting me from the protestation I was about to make.

“I, uh, I was just taking these ice teas outside,” I said. She smiled and nodded, and then turned to help Sue at the counter.

I picked up the two glasses and walked, as if in a dream, towards the door of the café. Heads lifted as I passed and I felt them staring at me, but the attention was remarkably short-lived. Most of the people here were regulars who could look at the bare breasts of Cassandra and Sue any time they liked, so one more topless woman wasn’t going to shock them.

Read the rest of this and 11 other ENF stories, in Naked Women in Shorts