“Jennifer, I don’t know how you do it, but I’m glad you do. I’ll just bring you something up, okay?”

The afternoon passed in a similar way to the morning, with a few phone calls and e-mails and a bit of writing. You know, it’s a great experience to be on a conference call to a room full of men who have no idea that they’re talking to a naked woman.

As five o’clock approached I could feel someone approaching my desk. I turned to see David again. It was getting so predictable by now: I’d swivel my chair around and the man approaching would scan me up and down, look embarrassed about how obviously he’d done it, and then stare at a point two inches above my head as he talked to me.

The PR company was interesting today as I’m sure Ellie (one of the middle-ranked organiser types – I don’t know what any of their job titles are – maybe mid-twenties) wasn’t wearing anything beneath her blouse. I mean, I know I wasn’t either, but that’s beside the point. I’m not sure if she caught me peering at her from across the room or not as she turned around from her screen just at the wrong moment and we exchanged a slightly forced smile.

I haven’t seen Kieran since Sunday and it feels like an age.

A new girl started today, called Rachel. She reminded me a bit of me when I started a year ago, which meant I liked her (of course.) I showed her where everything was, and where we saved things on the file system and that kind of thing. Then I had Pilates this evening.

She looked around the room, puzzled at the lack of attention. Part of it was disappointment, but partly she was grateful that she was able to do such a thing without any fear. She didn’t know what had overcome her, but she was glad it had.

“Is it done?” Helena asked. Was Lucia now free of the last restraining vestiges of her nymph spirit?

Pareia shook her head. “Not quite,” she said, and she placed her fingers on the naked girl’s arm.

Lucia turned around suddenly and looked up at Pareia. Did she know the dark, beautiful woman who was standing beside her? She looked familiar. She turned around and saw Helena standing on the other side. She couldn’t quite place who she was… The evening had gone in such a daze.

“Having fun?” Pareia asked with a smile. Lucia grinned and nodded.

Helena looked around the room and suddenly noticed that heads were turning in their direction. People were pointing at the beautiful, naked woman at the end of the bar, pointing and wondering: how did we not notice her before?

Read the rest of Pareia and Helena, and 11 other ENF stories, in Just ENF

It was fun at the start-up today. I wore a blouse again and this one the buttons don’t even start until the bottom of my cleavage. The CEO kept looking at me and then looking away embarrassed. I love it that someone with so much power can be so easily distracted. My skirt was down past the knee and I had tights on as it was pretty cold out.

The first thing Ha said to me was “I heard you had a fun weekend”! I can’t believe how much Kieran tells her. And I can’t even deny it once I’ve started blushing.

I was feeling pretty damn sexy all day anyway and popped an extra button on my blouse, just while I was sitting at my desk. At least I remembered to do it up again before I got up and walked around.

What a night! What a day!

Basically as soon as Kieran came through the door we had sex in the hallway right there and then. It’s amazing to think it took so long and now we can’t keep our hands off each other. I didn’t put my underwear back on (and made sure Kieran noticed) but just slipped my dress over my head.

We cooked dinner together and, to cut a long story short, afterwards I ended up sitting across Kieran’s lap at the dining table with his hands on my thighs, and it seemed to take an age for him to get the hint and lift my dress over my head. I was naked and he was still fully dressed and we just ended up kissing for ages, and then he put his hand between my legs and… oh my… At some point he stopped and asked if the neighbours could see through the blinds, and I said I didn’t care. Actually I hoped they could. I came pretty quickly after that.

So we moved to the sitting room and I curled up in his lap, still naked, and he stroked my body and I kept teasing him but every time I thought: right, that’s it, time to see how big he’s gotten in those trousers, he’d start kissing and fingering me again and I’d have another orgasm. I think that happened at least three times until eventually I had to squeeze myself between his legs, unzip his trousers and as I knelt there with his thighs pressed against my shoulders I realised that a blow job could actually be quite good fun. The last time I’d tried I hadn’t really enjoyed it, but there was something about being naked even while he was clothed yet I was the one in charge. I’m pretty sure he liked it 🙂

Anyway, Sunday morning we both had showers and he got dressed and I was still in my dressing gown, but it didn’t take long for him to get the hint and I was soon out of that and sitting naked on his lap. He made my day when he said Ha was right about me having a great body! And that if it was up to him I’d be naked all the time. I said I’d be naked for him any time he wanted, and I hope he realised how much I meant it!

“The University Library is usually empty on a Sunday, but then I’m not here to study either, am I?” 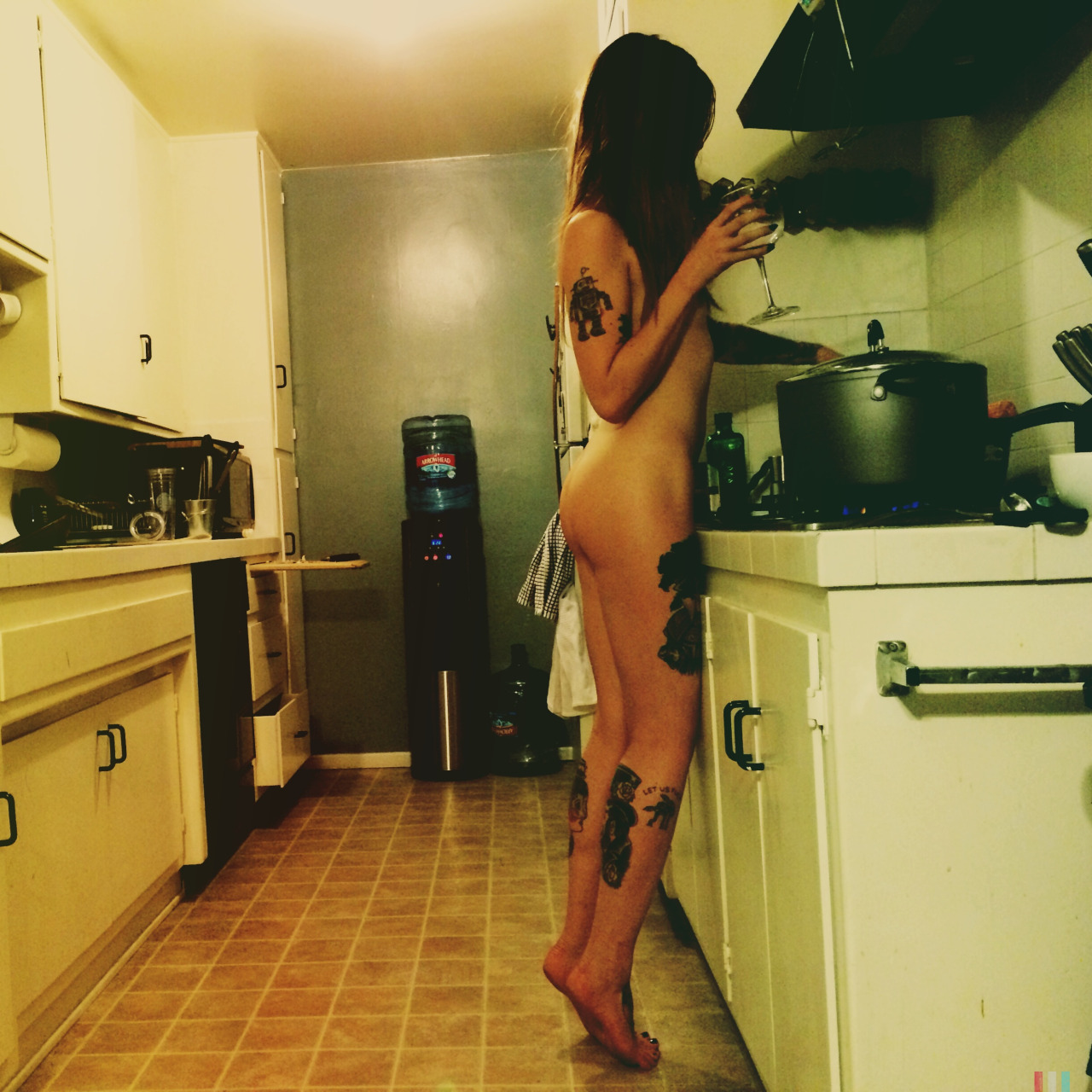 “How come,” I continued, “How come you’re naked?” I didn’t want to offend her by making it sound like it was a bad thing. “I mean, the tattoos are really great, and you look great…” She smiled kindly, but was still going to let me keep digging myself into this hole. “You lost a bet or something?… Or you turned into the Hulk and your clothes didn’t fit and then you turned back?…” I tailed off and Natasha laughed.

“Oh, no,” she said, “I live here. With Georgia.” She tipped her head in the direction of our party host who I’d been introduced to, and then summarily bored witless earlier.

“Oh,” I said, and was about to add “I see…” but then realised that it didn’t explain anything at all.

“No,” Natasha said, “I just… prefer it this way. I used to hang about in the house naked when I was by myself, and then Georgia would come home and find me like it and at first she thought it was weird, and then she got used to it, and then I’d completely forget about it and answer the door to some friends without putting anything on first, and then they’d get used to it too, and now I’m pretty much naked all the time, unless there are a lot of strangers around.”

“Oh,” I said, as if I understood, but obviously I didn’t really understand at all. Natasha smiled again.

“Every week my chores took me longer to complete, and soon I was spending the whole of Saturday naked and in chains. As the day wore on my pulse quickened, because I couldn’t let our dinner guests see me like this.”