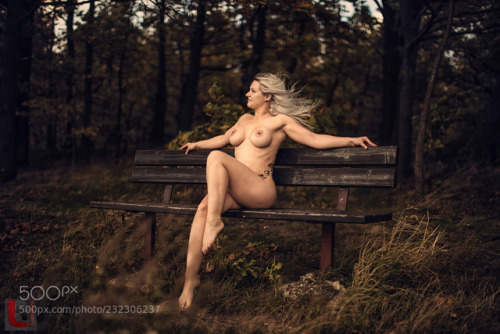 “Oh my God, no!” Lucy muttered, ecstasy and agony together in one breath. Suddenly she was naked. Worse, she was naked on a park bench, her legs spread wide and her arms tied either side of her, and there was nothing she could do about it. Now she remembered the video that Kasia had referred to, and how much it had turned her on, watching the young woman stripped and tied, so publicly helpless. She had fantasised about it and watched it over and over again, but that didn’t mean she had wanted to act it out.

Kasia stopped stroking her. Lucy willed her to continue. She was so close to orgasm, and perhaps, if she did, then Kasia would untie her, return her clothes and take her home. She wanted that release so much that she would even endure this humiliation for it.

“Oh God, no no no no no,” she mumbled with her eyes closed. Kasia remained knelt between her legs.

“It was a good video, no?” Lucy heard her ask in her eastern European accent. For some reason, Lucy nodded in agreement.

Lucy opened her eyes. She looked around and saw the sight she most dreaded: people looking back. They dared not approach, but her nudity was too obvious to miss now. Kasia looked around.

Read the rest of On The Bench, and 11 other ENF stories, in Just ENF