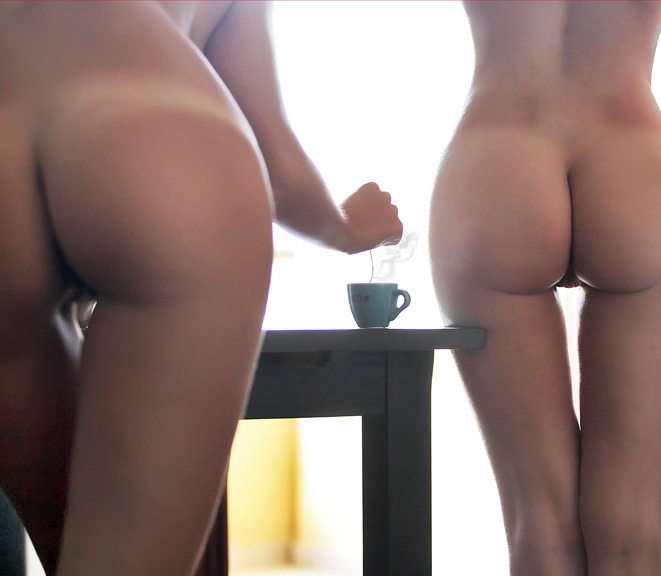 “Thank you, Tricia.” She paused for a second. “Well, as you can see,” she indicated the café behind us with a tilt of her head, “We run a small café, mostly serving hot and cold drinks, pastries and such. As you can imagine, it’s quite a competitive industry, and we had to have some way of standing out from the crowd. Now, it’s a truism in business that “sex sells” so, we thought, as we’re two young women putting everything on the line, we went with the idea of the ‘Naked Women Cafe’.“

“But there was a problem from day one, I believe?”

“Yes indeed, Tricia. Apparently the governors interpretation of state laws meant that we couldn’t actually run around naked all day.”

Cassandra pauses and I laugh obligingly. “Of course not,” I prompt.

“And so we don’t get anyone complaining about being misled, we had to change the name to ‘Naked Women in Shorts Café’.  It’s not quite as catchy, but it works.”

“I understand that you’re appealing the governor’s decision at the moment, but, for now, the title seems to be enough to pull people in anyway.”

“It does, yes,” Cassandra replied, “Sue and I always dress in pretty much the same way.” She looked down at herself and I hoped Jim had enough of her in shot to capture her pair of very short and very torn denim shorts, heeled sandals, and a baggy white t-shirt. It’s not often you see such a gorgeous pair of legs on a business program.

“But that’s not the whole story, is it?” I prompted Cassandra. “There’s one more piece to the puzzle of how you’ve managed to pull in customers from miles around?”

Cassandra smiled again. We had pre-planned how the conversation would flow, but Cassandra was great at improvising the words.

“Indeed, Tricia. We’d had this idea of serving in the nude but, until the appeal comes through, we can’t do that. But we don’t want anyone coming to a café called ‘Naked Women in Shorts’ and being disappointed, so we work dressed like this.”

On cue Cassandra grabs the bottom of her t-shirt and pulls it swiftly and smoothly over her head. She’s not wearing a bra underneath and I stare for a second at her perfect, small breasts. Her long hair falls over her bare shoulders and it occurs to me that if the café business ever fails she could easily turn to modelling. She’s almost impossibly thin and the denim shorts cover so little she’s as close to being naked as she can be, and still be legal. I’m suddenly insanely jealous of the combination of brains, beauty and youth.